The Stories Behind 13 Wedding Superstitions & Traditions

Marriage is a concept rooted in tradition, and many cultures across the world have their myths and superstitions about the facets of the ceremony. Before you go wedding ring shopping for the bride or groom, or start planning and budgeting for the wedding, it’s helpful to understand where some of these traditions and superstitions originated from, and decide for yourselves if you want to adhere to them. 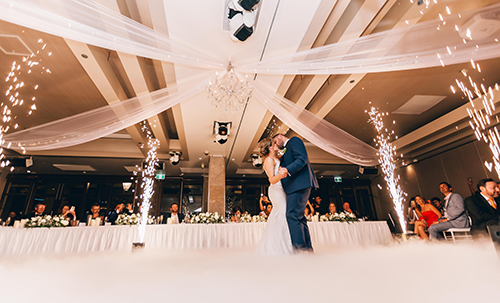 1. Seeing Each Other Before the Wedding
Plenty of modern brides and grooms believe that they shouldn’t see each other before the ceremony on the day of the wedding. However, this tradition stems from the days of arranged marriages, when marital unions were more about coming into money and land. Under these circumstances, the parents of the bride worried that if the groom saw their daughter before the actual wedding ceremony and wasn’t attracted to her, that he may back out. To make sure the transaction came through, it was customary to keep the bride and groom separate — only seeing each other at the wedding ceremony so the groom had no chance to change his mind.

Today, adhering to this tradition is still debated. As the nature of relationships have changed, and arranged marriages are now less common in Western civilizations, the bride and groom may decide to spend the whole wedding day together, before and after the ceremony, to celebrate their established love and commitment to each other — rather than avoid each other because they eloped for financial reasons.

2. Wearing a Veil
Some believe that the wedding veil was another measure against the groom seeing the bride before the last possible second, leaving him no opportunity to back out of an arranged marriage. It is also presumed that this practice originates from Rome, and that the bride would wear a veil down the aisle to hide from evil spirits, envious of her joyous occasion.

Whether to ward off spirits, to make sure a marriage goes through, or just as a nice addition to a wedding gown, veils aren’t as common in contemporary marriages. Today’s marriages focus on the couple.

We now know that wedding rings can fall off, crack, get misplaced, and get involved in other mishaps for plenty of reasons — none of which are indicative of a larger problem in a marriage.

4. Getting Knives as A Wedding Gift
The Vikings believed that knives gifted at a wedding would suggest an impending split between partners. Such folklore is usually not taken seriously in modern times. However, if you do receive a knife as a gift, and hold to this superstition, simply defuse the situation by providing the gift-giver a penny. After that, rest soundly knowing that the knife was purchased as part of a transaction, rather than given as a gift.

5. Dropping Your Wedding Ring Before The Ceremony
This myth has both good and bad connotations, depending on who you are hearing it from. Some believe that the person who drops their wedding ring before the ceremony will die, while others believe they will be the one to witness the relationship perish.

7. Why Is it the “Ring Finger?”
This ancient Greek tradition is still very much alive today. Greek medical professionals erroneously believed that the ring finger (the third finger on your hand) holds a vein that runs directly to your heart, and that wearing your ring on this finger is a testament to eternal love. While there is no conclusive evidence of this, wearing your wedding ring on your third finger is still the standard for married couples today.

8. Rain on Your Wedding Day
Weather is said to have many connotations associated with it when it comes to weddings. Many people believe that rain on your wedding day can ruin the occasion – especially if your ceremony is to be held outside. However, Hindu tradition says that rain on your wedding day brings unity, fertility, and cleansing. Although you and your guests may get soggy, remember that if dark clouds roll over your wedding venue, it should be celebrated rather than dreaded.

9. Itchy Ring Finger
Although not technically a superstition for a bride or groom, an itchy ring finger may mean you’re about to become one. If your ring finger itches, many believe that this is a sign of engagement or marriage in your future.

10. Carrying the Bride Over the Threshold
The groom picking up and carrying the bride over the threshold (often into their home) is born out of superstition. This tradition is generally considered to be from Medieval Europe, but may stem from Western European and other ancient civilizations’ folklore as well.

The commonality between these threads is a belief in the bride’s susceptibility to spiritual possession or attack via the soles of her feet. Traditionally, the groom was meant to carry the bride across the threshold to avoid the spirits and prevent bad luck in case the bride trips.

11. Breaking Glass At Your Wedding
For those who aren’t Jewish, breaking glass at a wedding can determine how long your marriage will last. Each shard the piece of glass breaks into represents one year of marriage. For the Jewish faith, breaking glass is a long-standing custom with several symbolic meanings including remembrance and a moment of reflection for the destruction of Jewish temples.

12. Can Your Wedding Ring Determine the Gender of Your Next Child?
An old wives’ tale encourages expectant mothers to tie their wedding ring around a string and hold it over their belly. If the ring swings around in a circle, it is believed that you will have a girl. If it swings back and forth, it is said your newborn baby will be a boy.

13. Why Gold or Silver Wedding Rings?
Gold and silver have been considered valuable metals for centuries and across many different cultures. Aside from monetary value, gold and silver can represent a sign of trust and faith in your loved one. Today, there are a variety of metals couples choose for their wedding rings, and each has its advantages. For instance, some couples prefer wedding rings made out of tungsten for sturdiness and a lower possibility of cracking.

While we may still follow some of these traditions, it may not be for the reasons originally intended. There are many more myths, social customs, and observances within a wedding that may give someone pause. However, you shouldn’t let any of these be a reason to disturb your peace of mind for your wedding. An investigation of these myths can show you that many are untrue, or have been transformed to better serve a more contemporary wedding.

About the Author: Tungsten Rings Center